It’s almost Halloween and scary is in the air.  I’ve seen frightening decorations, costumes, and bowls for Halloween candy.  But scary parents came into my mind today. Not the kind dressed up like witches or goblins, but the normal looking and mild mannered sort of people who might have sudden angry outbursts. Now, that is scary–especially to a child with autism. Who would do a thing like that?   Well, way back when–occasionally– me.

I’m not proud of it, but I recall having some scary “mom”ster moments when Katie, my daughter with autism, was small.  I had a moment when she had been crying for a long time and I was alone with no help.  I had another moment during her potty training which took much longer than I expected and wanted.  I don’t recall the details of those events but I remember frustration, anger, and an occasional raised voice. Of course, it’s effective to yell at an infant or preschooler (not!). Especially with kids with autism, loud or frustrated voices just increases anxiety and cause behavior to further deteriorate.

Years later I was frustrated with parenting so I picked up the nearest unbreakable object and slammed it down several times on the dresser in my bedroom.  I thought this was a better alternative to yelling.  And it was.  Except that the object was a DVD case and the dresser was solid maple.  It was a hand-me-down dresser (I hesitate to call it an heirloom) from my husband’s grandfather.  I forgot that the solid maple dresser had recently replaced our veneer and plywood dresser from Goodwill.

Today, the scars on the dresser reminded me of the scary side of myself.  I could tell you worse stories, but you hardly know me so let’s take it slowly.  The point is that the behaviors of children with autism can sometimes take parents past the brink of self-control.  I remember feeling horror at myself the first time I realized that I could really hurt my child if I didn’t pull it together.

This isn’t a fun topic. But research shows that kids with disabilities get hurt by family members more often than typical kids.

Special-needs parenting calls for a lot of maturity and self-control that we have not necessarily developed before becoming parents.  We have to learn it in a crash course—and it is really difficult.

If you are struggling with this, the main thing to do is to admit it to yourself and to someone you trust.  It doesn’t make you a monster.  It means you are human.  But you have to get help one way or another.

During my difficult times, I prayed a lot.  I also read a daily written promise committing myself to remain calm, no matter what.  I looked for new ways to help keep my daughter calm as her peace kept me calm, as well. Counseling would have been my next step if things had not improved.

If you sense “mom”ster coming out, plan her demise now.  I never throw pitches into my blogs, but this is an unusual month, so I’ll go for it. I have a helpful chapter in my book,  Persevering Parent, for parents who are behaving badly in response to their child’s social, emotional or behavioral challenges or disabilities.  In it, you’ll learn more about me and my scary behavior, but you’ll also learn how moms like us can move on to bless our children in the way God intended.

Finally, keep it foremost in your mind that God is for you and your children.  He’s on your team. He’s given you a spirit of power, love and self-control just for these most challenging moments of your life (2 Timothy 1:7).  Claim it, live it, and the “mom”ster won’t last long.

Check out the Book! 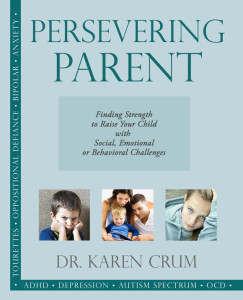